Nutrition in the face of Guido’s, Black licorice, and Samoas.

Food, Food for the Body

I had really good intentions tonight.

Well, I have had REALLY good intentions for longer than that. But this time I had a game plan.  I have the stuff on hand.  some of it was even prepared.  I was thiiiiiiiiis close to having it started, when the plan changed.

We’re talking about dinner, if that isn’t totally evident.

See, two of the three small people at home wanted to join their friends at a boy scout thing, so we did what any self-respecting parent would do: we pretended to play favorites and whisked the youngest to dinner.  Now, remember, I had GREAT intentions!  Hubby mentioned Sushi.  I salivated. Yum.  “Sushi,” I told myself, “is really healthy!”

But the youngest wasn’t on board with that.  We pulled him aside and told him the plan (that we’d let the boys out the FRONT door to scouts and dash through the BACK to dinner out!) He was elated.  He fist pumped.  He said “Yessssss!” with that adorable lisp that will cost me 10G in braces one day.

But then he said the fateful word: “Guido’s!”. 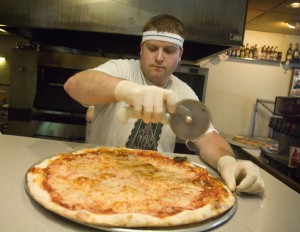 Now, wherever you are, you may not have a Guidos like the Guidos in Boise.  It has really great (really really) NY pizza that makes my native NY hubby so so so happy.  And what’s a mom to do?  I mean, insisting on sushi when your adorable lispy youngest wants pizza?  C’mon!

I should have known better.  I can’t control myself there.  Ever.

See, I CLEARLY have to have this creation. But then I CLEARLY must also have the basil too.  My hands were tied.

Damn you, bacon.  Damn you Guido’s.

Am I alone here?  I doubt it.  But let’s face it: it’s not Guido’s fault (or the licorice I ate after Guido’s, or the Samoas I plan to purchase and devour in the next few days).   I am the one who caved.  I know all the tricks, and still I caved.  And it’s the defeat that comes after that must stop.  The feeling of being bad because I ate more than/differently than I had planned?  (can I get a witness?) THAT feeling is what is out of place.

So the lesson here is how to forgive myself, get past it.  Not allow one misstep to usher in an avalanche of other bad decisions.

and there’s another lesson:  I really need to pay attention to this one: the pizza that i smelled…that bacon yumminess? well first off it was burned on the bottom.  and b (yes i did that on purpose to see if you’re paying attention) it just wasn’t that good.  You can call it what you like, but I am pretty sure it was NO ACCIDENT that the impulse pizza was crap (disclaimer: i have never ever had burned pizza or even CRAP pizza at Guidos, i think this was some sort of reverse miracle.)  Call me crazy, but I am pretty sure it was a little ‘pause’ button from God saying “um, hey…you SURE you want that? because it’s really not what i had in mind for you today.” but i remained undaunted and steadfast.  committed to my cause of eating  mediocre burned pizza.

i juuust couldn’t step back and believe that this wasn’t the last piece of Guidos to be in my life.  It’s like i wanted to snarf it down.

I am sitting here drinking TONS of water because black licorice and pizza are covered in salt.  I know that I will be up to empty out the bladder a few times in the night, and that is going to give me more chances to beat myself up.  But then tomorrow is a new day.

Every meal i eat and all the choices are still mine to make.   And they will be just a little better than tonight’s.

The Value of Vulnerability
Farmer’s Breakfast (for dinner!?)